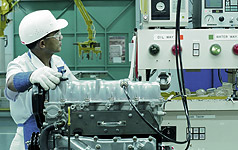 The world’s automobile industry made over sixty-six million cars, vans, trucks and buses in 2005. These vehicles are essential to the working of the global economy and to the well being of the world’s citizens.

This level of output is equivalent to a global turnover of €1.9 trillion. If vehicle manufacturing was a country it would be the sixth largest economy in the world.

Building sixty-six million vehicles requires the employment of more than eight million people directly in making the vehicles and the parts that go into them. This is over five percent of the world’s total manufacturing employment. In addition to these direct employees, about five times more are employed indirectly in related manufacturing and service provision, such that an estimated more than 50 million people earn their living from cars, trucks, buses and coaches.